Laughing at God is probably not the most respectful way to react when God comes with a message. Sarah thought it was quiet funny to hear that she was going to have a baby when she was already an old woman. With all the logic and reasoning she could muster, all she could do was see the humor in it and laugh. Others might have cried after waiting so long to have a child. There were probably many times in her life and during her marriage that she had felt like a failure. She had failed to provide a child, especially a son, to her faithful and fine husband Abraham.

Laughing is what we sophisticated people often do when we hear something unbelievable. It is certainly not a sign that we are taking the matter seriously. It is a lack of faith. God “straightened” Sarah out a bit when He said ““Why did Sarah laugh, saying, ‘Shall I surely bear a child, since I am old?’ Is anything too hard for the Lord? At the appointed time I will return to you, according to the time of life, and Sarah shall have a son.” (Genesis 18:13-14)

Sarah failed to realize that when logic and reasoning say God can’t, it is God that smiles and says “Oh yea, I’ll show you!” It was God who got the last laugh when Sarah at the age of ninety-one had a son.

When God makes a promise, He will fulfill it. There are no miracles too small or too great for God. We are blessed to know that God loves us and will hear our prayers. Jesus said “Ask and it will be given to you; seek and you will find; knock and the door will be opened to you.” (Matthew 7:7) Instead of laughing or showing our incredulity let us rediscover and strengthen our faith, knowing that God is still able and will deliver us in His time.

There you were minding your own business enjoying the son that God had promised you many years ago. Now everything had fallen into place. What could possible go wrong? Then you heard the voice of your God, the voice that had always comforted you, the voice that had always directed you. How many blessings had you received by just listening to this voice? The day just couldn’t get any better, except God made the strangest request. This loving, faithful God who hated evil and sin had just asked you to commit the most heinous act of sacrificing your son.

What do you do? Abraham found himself in this position. (Genesis 22:1-2) What is remarkable is that Abraham’s faith never faltered. He followed God’s direction to the letter.

He went to where God directed him to go, laid down the wood and placed his son on the altar. He then raised his knife and at the very last moment was stopped by God. (Genesis 22:9-12)

God provided a ram for the sacrifice. (Genesis 22:13) This must have felt like the definition of relief. Isaac was spared and Abraham did not lose his son. Beyond any doubt he proved his love and obedience to God.

Jesus reminds us that we must love God above all things. (Matthew 22:37-38) Consider those things that have the most value to you. Now consider the people you love the most. Are they more important to you than God? Would we be willing to sacrifice our relationship with God to please them?

Abraham was willing to lose his son for God. What are we willing to surrender to please God and have a closer relationship with God? This is the God who has already proven His love to us. God is the father who actually did sacrifice His son Jesus so that we might be forgiven and be saved. It was the sacrifice of His son Jesus that paid the debt of our sin and allowed us to be called sons of God.

He has shown us His love. Perhaps it is our turn to show Him our love.

The story of Sodom and Gomorrah is truly an odd one. We have the twin cities standing during Abraham’s time as terrible symbols of rebellious sins against God. The Lord said “Because the outcry against Sodom and Gomorrah is great, and because their sin is very grave,”. (Genesis 18:20) He was speaking to Abraham and informed him that He was about to bring destruction on them. Abraham would plead before the Lord, who informed Abraham that He would not destroy the cities if He found at least ten righteous men. History would show that ten were not found. (Genesis 18:32)

Later the Angels would appear to Lot and his family, who lived in Sodom to warn them so that they could flee. The men of the city were so depraved that they demanded to have the Angels to satisfy their sexual hunger. (Genesis 19:5-4) Fortunately the Angels blinded the men before they could cause any harm.

When the morning came Lot and his family fled the city. They had been warned not to look back. It is a message that still speaks to us.

God desires a better life for us and demands that we flee from evil and sin. He demands that we remove them from our lives and distance ourselves as much as possible from their temptations. However evil and sin seem to have a bizarre hold on us even when we see their evil faces. Such was the case of Lot’s wife.

Lot’s wife ignored the warning and longing looked back and instantly turned into a pillar of salt. (Genesis 19:26) Perhaps she truly did not want to leave this evil city and was already thinking of all the many wonderful things she was leaving behind. In our lives we must push on, looking forward to the promises of Christ, our eternal future with Him and the many blessings of our new life with Him. We must contemplate on that which is good and resist longing for those things we left in our sinful past. 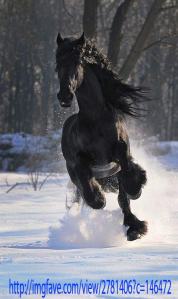 I was lost and walking through a wintry wilderness.  I had been walking about 5 miles.  I was sure to die of frost bite.  I dropped to my knees and prayed to God “send me your angel and take me now”.  I could not take the frigid cold any more. Then suddenly I saw her coming.  It was the most beautiful beast a man ever did lay his eyes on.  It was pure power and speed.  It ran out of the woods and straight at me.  I was sure this four legged Angel from God, came to rescue me.  But the power in her hooves scattered the snow such that I could hardly see the trees behind her. It was a furious running that put a mighty fear in me. I began to lose courage. Then she was upon me. My heart froze and then she stopped. Up went her legs and a mighty whinny could be heard. She stomped her feet right next to my hands but never did hurt me. Now she was still and I could look at this dark muscular beast.  She had the largest most beautiful blue eyes. She was perfectly calm and still, just waiting for me. Indeed she was an Angel. I lifted myself onto her and she took off like the wind. I did not know where she was heading but I pretty much knew I would not have a say in the matter. Soon enough we were there, it was a small medical outpost.  A few men helped me down and pulled me toward the door. I had to take another look at my Angel and I turned to see her.  But alas she was gone! “Where did she go?” I screamed. The men looked back, and like me, were in awe. For this mighty Angel had just vanished.

One occasion where God presented a mighty beast to both save and teach one of his servants a lesson was in the case of Jonah.  Many assume that Jonah just got swallowed up by your ordinary whale that just happened to be waiting for Jonah to be tossed into the ocean, in the midst of a terrible storm. However that is unlikely and not biblical.  Scripture says that God appointed a great fish to swallow Jonah. (Jonah 1:17) God most likely formed this beast with the purpose of holding Jonah someplace safe so that he would not perish, but instead have time to contemplate on his wrong doings.  There is also the case of Abraham sacrificing his son. While under the directions of God Abraham reaches for his knife and is about to kill his son when God stops him and out of nowhere appears a ram trapped in a thicket. (Genesis 22:13) God can care for us under any circumstance, in any situation and can use any method that pleases Him, even if it means presenting a mighty four legged Angel!

Visited by an angel

Abraham was a hundred years old when his son Isaac was born to him. Genesis 21:5

The holiday season will be sneaking up on us and Christmas shopping has already begun. The smartest among us have already bought plenty of gifts and most of it on-line. Unfortunately, no matter how hard we try some of us always land up buying some gifts late. But the worst is when we have to go in person to that local department store having that super sale at the last minute. Then we’re face to face with the longest lines we could possible imagine. Patience then is not only a virtue but a necessity. We have no other choice.

Waiting on God often feels the same way. Especially if you have an aggressive nature like myself. Abraham had to wait a whole lot longer than me and managed to keep his faith. He was called out from his comfortable home and taken on a journey that would take him over all of the Middle East, including Egypt, on the promise of being the father of many nations and inheriting the Promised Land.

The problem is that Abraham didn’t even have a son. He patiently waited until the ripe old age of 100, to finally receive the promised son through his wife Sarah. He did this while faithfully following God’s directions, worshiping Him and sincerely trying his best to live a righteousness life. There were wars, family conflicts, various trials and a whole lot of waiting. However Abraham received all that God had promised.

We too must often wait on God’s promises. He is faithful and his reward will be finer than the super sale at the local department store.

The snowman is having a bad day